Stop the Single Use Madness!

Stop the Single Use Madness! 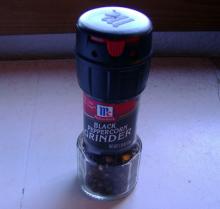 In case you hadn't guessed already, I'm really cheap.  I like to think of it as "frugal" or "thrifty."  That sounds nicer, doesn't it? "Frugal"?

At any rate, I'm not sure "frugal" covers the fact that I have been using the same gigantic container of ground black pepper for about ten years.  I bought it at Costco, which was SUCH a mistake.  No one needs to buy a pound of ground pepper at a time.

I finally used the last of it last weekend.  Its plastic container wasn't recyclable in my county, so I washed and repurposed it for holding various bulk foods.  Then, with much excitement in my heart, I went to the grocery store to buy a new pepper.

After all this time using the same sad pepper, I decided to get a pepper grinder.  Fresh ground pepper!  What could be better?  I purchased a fairly inexpensive grinder with peppercorns included, produced by McCormick, nestled in the spice aisle.

Unfortunately it wasn't until after I had taken my grinder home and used it that I discovered it is not refillable.  A single use pepper grinder!  Which cannot be refilled with peppercorns!  Seriously, it never occurred to me that this would be the case.  I thought I was being cheap frugal by finding a pepper grinder for only a few dollars.  Not like those fancy ones that cost $15-$20!

I looked around online and found that many people have been asking if there is a way to refill this little grinder.  There are two problems: the bottle is glass (perhaps to foil those of us who could easily drill into it and refill it).  And the grinder is not very sturdy.

Some people have been able to use a glass drill, and drill a hole into the bottom of the bottle.  This can then be plugged with either a cork (shaved to fit) or with a bit of tape or a round sticker.  However, the grinder mechanism is all plastic, and one account I read online said that it would only last for 3-4 refills before crapping out.

The only good news here is that the bottle itself is recyclable, although the plastic lid and grinder mechanism are not.  And that if you buy anything in a single-use form, glass is a good choice.  Glass can be recycled an infinite number of times, it is cheap and relatively environmentally friendly to do so.  (As compared to recycling, say, paper.)

Better still, let's warn people not to buy it.  Who wants a non-refillable peppercorn grinder, anyway?  It's idiotic, like a single-use coffee machine.  On the frugal front, anything single-use benefits the company far more than it benefits the consumer.  And from an environmental perspective, all it does is waste valuable resources, as well as creating a lot of stupid plastic waste.

We Support
Climate Activism
Click to reach the League of Conservation Voters.
Conversation Processing Intelligence™ beta website!
Click here to visit the hub of the Klat Network.
This site is part of the Klat network of blogs, forums, and communities.

Green makeup: Eco-friendly products that are good for your skin and the environment

Keep your house cooler this summer

Four Surprising Ways To Save The Planet

How Far Would You Be Willing to Go?

Maybe It Is the Natural Course of Events

Use a Dry Erase Board Instead of Paper Lists

Grow Your Own Dairy Products