Borax: Is It Safe?

Borax: Is It Safe? 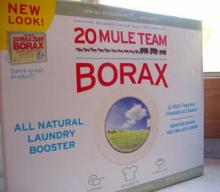 I wanted to address some responses to my last post, and a lot of people's reactions when I tell them about my awesome new laundry detergent.

(Quick backtrack: it IS awesome, bee tee doubleyew!  I had a grungy old cotton pillowcase that came out of the laundry looking brand new.  And it whisked away a cherry Kool-Aid stain on a white cotton dishtowel like it had never happened.  All this for about $1.65 for 2.5 gallons!)

After explaining the ingredients and the process, a surprising number of people have done research and returned with a fistful of links that say you shouldn't snort borax in bulk.  One person advised me to wear eye protection while mixing up my detergent on the stove.  Another said that I should lock it up away from my pets.

Okay, let's take a deep breath.  Now I know that the internet is prone to overreaction, particularly in the safety arena.  But to address those concerns I have to ask, What the **** do you think is in Tide?

As much as I would love to believe that Cheer Bright Clean "Fresh Clean Scent" cleans your clothes with angel whispers and bunny giggles, this is not the case.  US regulations do not require detergent manufacturers to list the ingredients, and if you'll notice, many of them don't.  However, rest assured: that stuff is SUPER TOXIC.

You should not get Tide Plus Febreze Freshness Sport in your eyes.  Nor should you let your pets drink it.  (Fortunately, my cats seem about as likely to imbibe Tide as they do borax powder.)

Where does this fear come from?  Well, Borax doesn't have a multi-billion-dollar ad campaign involving children running through fields and laughing and flowers and clean sheets flapping in the breeze.  (That's not where Cheer comes from, by the way.  It's a petroleum product; they should show oil fields. But I digress.)

Borax also sounds like several things that ARE very toxic.  Like boron, and boric acid.  However, borax is neither of those things.  In fact, borax is a relatively inert chemical, a kind of salt, which is often used in place of salt.  Although admittedly, this is in countries with a looser understanding of "food safety" than the United States.

Let's be clear: you should probably not eat, drink, or snort borax.  Nor should you roll around in a bathtub full of it, lounging in the paste as you read a book and drink a nice glass of wine.  Most likely the worst that would happen is a rash, but if you eat enough borax, you can experience renal failure.

Wikipedia says the LD50 (median lethal dose) of borax is 2.6 g/kg in rats.  So the median lethal dose for a 150 pound person would be about 6.5 ounces.  In other words, do not eat an entire cup of borax!  But also, you should not drink Tide or Cheer.

In fact, a mixture of borax, washing soda, and bar soap is quite a bit safer than any other laundry detergent on the market.  Incidentally, I was finally able to track down a list of the ingredients in Tide Original Scent.  A prominent ingredient?  That's right: borax!


Sometimes You Just Have to Recycle It

We Support
Climate Activism
Click to reach the League of Conservation Voters.
Conversation Processing Intelligence™ beta website!
Click here to visit the hub of the Klat Network.
This site is part of the Klat network of blogs, forums, and communities.

Green makeup: Eco-friendly products that are good for your skin and the environment

Keep your house cooler this summer

Four Surprising Ways To Save The Planet

How Far Would You Be Willing to Go?

Maybe It Is the Natural Course of Events

Use a Dry Erase Board Instead of Paper Lists

Grow Your Own Dairy Products